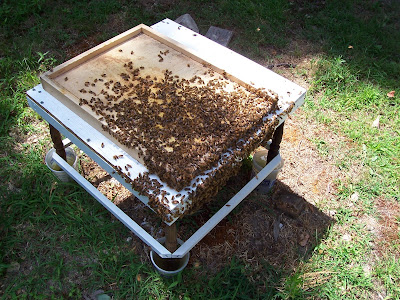 Using the method outlined below, I carted the hive approximately 300 feet away. Because the site where I was going to dump the bees was close to the road that my neighbors travel, I informed them of the time I was doing this operation. That way they could keep themselves, pets, and children indoors.

The site was in the woods so I layed a sheet down so when the bees fell, their wings wouldn't get injured (I'm such a Mom). The bees were very persistent in wanting to get back onto the frames and I had to continuly brush them off. A couple of the bees burrowed into a cell and touched their little bee bottoms with my brush, which made them back out so I could brush them off.

My wheelbarrow was several yards away and after filling the extra empty hive body with frames, I pulled each frame out to ensure that no bees remained. Satisfied that the frames were completely denuded of bees, I took off back to the hive site. I could not believe how many of the bees were waiting for me.

Wendolyn
Hi! My name is Wendolyn and welcome. My interest in bees started several years ago. My grandfather kept about 30 hives at one time and my father helped him take care of the bees. I wanted to create memories with my father and knew that keeping bees would be a great way to do that. In February 2008, I found a local bee class held in a Monastary in Manassas. My intial thoughts were to stick my toe in and see if I thought I would enjoy beekeeping; however, the instructor said if you want to keep bees this year you will need to order them within the next two weeks. Lots of thoughts raced through my head and the loudest one was the train is leaving the station, get on board now. So far, six hives and growing. Never have regretted it. Special thanks to Custom Upholstering and Total Restorations in Marshall, VA www.total-restorations.com, for sponsoring the beehives.