Bees on the left are my bees and the one on the right is one of the robbing bees.
Monday, August 17th 2009

Hive #4 has had a rough time of it. Laying workers, resolved, fourth installed Queen has survived (Queen Makeda). I inspected the hive and found wax moth infestation, which seemed to have happened overnight. I noticed the hive was very active, more so than usual. I was heading to work and didn't do any investigations but I had a gut feeling that something was wrong. When I arrived home, I put on my suit and that's when I found the hive was being robbed by large bees (see photo) and four frames infested with wax moths. I removed the frames, brushed off the bottom board that was covered with moth or beatle larvae. Then I changed the entrance reducer to allow only one to two bees at a time, wetted a sheet and put it over the hive, draping the sheet to almost the ground. Damage control. I will make replacement frames and figure out what to do with the moths and beatles.

My other three hives are at my parent's place and I keep one hive, Hive #4, in my back yard. 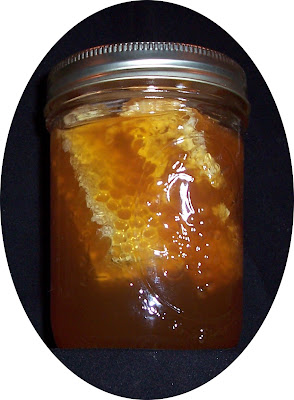 Sunny, humid, 96 degrees. Approximately 2pm. The Summer was cooler than average and we had lots of rain. The bees were docile and not at all aggressive.

Inspected Hive #1 (last year attacked twice by bear and queen was superseded this past Spring.) The colony had been weak in June and I found lots of brood, honey, and bees. Very nice. There is a minor problem with small ants that have decided to build a nest on the inner top cover. I brushed them off and my dad cut back the grass and bushes to discourage them. Because this hive was so weak we hadn't planned to rob it and didn't install a queen excluder.

Hive #2 - "Blonde Bees" Cordovan Bees. I bought this colony this year and they are so productive we were able to harvest honey from this hive. Just one rack because this breed needs lots of honey through the winter because the queen continues to lay eggs heavy throughout winter, which means they need a large store of food.

Hive #3 - Found some queen caps, lots of brood, and honey. Harvested honey from this hive. One of the racks had honey and bee bread. We were able to separate the honey from the bee bread, and I will use the bee bread to feed the colonies during the winter. I will make a pollen patty out of it and it will be a treat for the bees during the cold winter months.

August 9th, 2009 - Inspected 4th hive to check status of the queen. I had gone through the laborious process of eliminating the laying worker(s). Installed the 4th queen on July 23rd and inspected the hive July 30th. After a week the queen was still in her cage and hadn't made a dent in the candy. I released the queen in the hive and the bees began to ball her so I picked her up and tried to put her back in the cage, however, she flew off. Ack. Thirty minutes later we had a torrential downpour. I thought that was the end of the queen and the hive.

I was surprised to see that Queen Makeda was in the hive and everything was as it should be. Even through the bungling of the beekeeper, she reigns in her kingdom.

Wendolyn
Hi! My name is Wendolyn and welcome. My interest in bees started several years ago. My grandfather kept about 30 hives at one time and my father helped him take care of the bees. I wanted to create memories with my father and knew that keeping bees would be a great way to do that. In February 2008, I found a local bee class held in a Monastary in Manassas. My intial thoughts were to stick my toe in and see if I thought I would enjoy beekeeping; however, the instructor said if you want to keep bees this year you will need to order them within the next two weeks. Lots of thoughts raced through my head and the loudest one was the train is leaving the station, get on board now. So far, six hives and growing. Never have regretted it. Special thanks to Custom Upholstering and Total Restorations in Marshall, VA www.total-restorations.com, for sponsoring the beehives.